Here we have 2 computers testing the capacity of Kling-Net.

Kling-Net can make use of gigabit ethernet and in this test we reach close to 50 MB/sec.

To do that we have one computer acting as a media server. For testing facility the software just grab the computer screen and then send it to the Kling-Net devices mapped.

The other computer is acting as 30 virtual LED panels, each panel has 128 by 128 pixels and receive pixels in 24 bits of resolution, 8 bits of each component red, green blue. 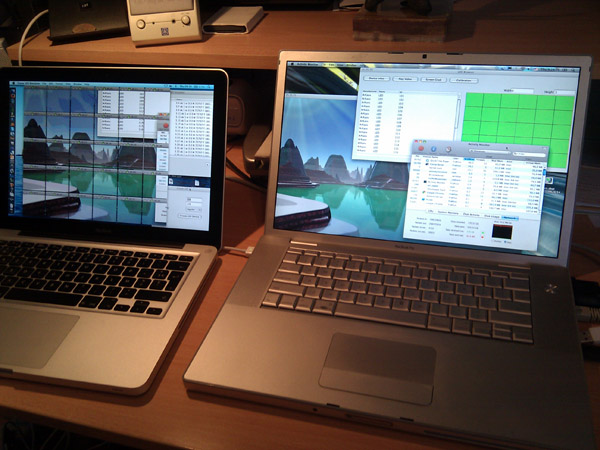 Here you see the screenshot of the MacBook acting as the server. The server application is called “Cocoa Server” you can see it just uses a few Mb of memory and 34% of cpu time. It feed the 30 LED tiles of 128 by 128 pixels at 30 FPS. The bandwidth is very stable at around 44.2 MB/sec. 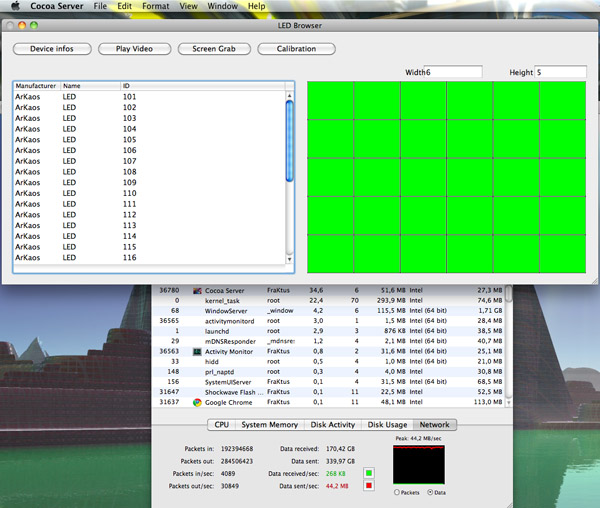 The Kling-Net protocol has no restriction regarding output FPS or bandwidth other than the hardware limitation and so it has the capacity to saturate even gigabit ethernet.

Here is a quick video showing the desktop of the server being streamed to the 30 virtual tiles of 128 by 128 pixels:

Video made with an Android phone, the focus is not good when you are too close of the subject.

Here is another test where we drive a lot of devices. In this case there are 1500 Kling-Net devices, the set-up is the same than in the first test: one laptop is the server and the other one is simulating 1500 devices. So in this test the server is opening and holding 1500 TCP streaming sockets. Faster server will hold much more connections. The devices are low resolution 8 by 8 pixels but we still need around 30 MB/sec on the gigabit link.

Here our simulator shows the 1500 devices running without streaming errors:

Here you see the bandwidth on the simulator end, it’s a little bit lower because with 1500 connections opened there are some networking overheads:

Here is the video from where the pictures are extracted:

From Manchester, the land of Joy Division and New Order, a new sparkle of genious is born : LoneLady.

Julie Campbell is the whole band herself, mainly playing guitar and using rhythm machines, here and there she uses some touches of synths and there is no bass used in the tracks. The music is minimal and cold but never boring. Indeed she is a wonderful guitar player, in each track the guitar riffs are stacking to creating nice nervous patterns.

Her sound is very unique, the way she is shaping the guitar riffs is very creative and personal. In some tracks such as “Nerve Up” she is building layers of sound in a minimal way, other tracks are much more Punk oriented such as “Army”, one of my favorite of the album.

Here is a track from her first album hosted on youtube:

And here is her web site, minimal also lonelady.co.uk

She has been signed to Warp Records and I wish her the best, can’t wait her next move!