One of the very cool consequences of being a visualist coder is that you come in contact with a lot of inspiring peoples. Sometimes you even get to meet people that you knew before starting your project and company. This is what happened with Michel Huygen, the soul of Neuronium.

I have always been attracted by electronic music that has it’s roots in the Berlin culture at the time when the city was a closed place. Neuronium music is following the heritage of this movement but with a unique touch that give the music his unique cosmic feeling.

I know Michel Huygen since a long time because he was an early user of ArKaos software many years ago. Not every musician has like him such visual sensibility.

Another inspiring person I got the chance to meet is Eric Wenger, the creator of many cool applications such as MetaSynth, ArtMatic, ArtMatic Voyager and many years ago the original creator of Bryce, the first 3D landscaping application.

ArtMatic is a software based on mathematical graphs defining textures or height maps that are then used by ArtMatic Voyager for the generation of landscapes. I was listening some Neuronium tracks a few months ago when I realized that the music matched very well with some of the ArtMatic worlds. At the same time I received a message of Michel Huygen informing me that he will come to Brussels to present some of his graphic works. and his latest cd’s I used that opportunity to start rendering a few loops and presented that to him during our meeting. Michel was very enthusiastic about this idea so I did push it to the end and here is the result.

You can see here the final version of the track “In Aliens I Trust” I decided to visualize, if you go to YouTube you can see it in 720p: 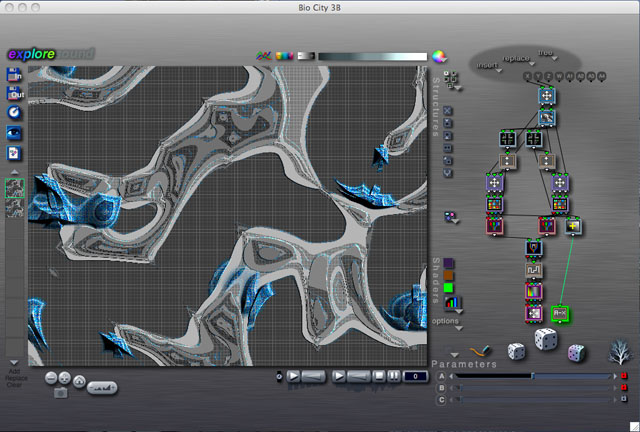 The rendering of each movie segment is then done in ArtMatic Voyager where you can define the camera movements and launch the renderings:

All the segments took one month to render, for this work I used a MacMini that I have a home. I then assembled everything in Final Cut Express.

Hope you enjoyed the ride, the music is fantastic and the capacity of ArtMatic Voyager is just endless!

Every company has its own culture and ArKaos defined itself during his evolution. We had the chance to start early doing real time video software and this gave us the opportunity to have many users. At this early time we also saw the new generation coming and the opportunity to help it by providing the needed tools. Basically computers were allowing to replace more expansive hardware video players and were doing it with so much more flexibility.

The pricing is an important thing. While ArKaos VJ integrate perfectly with DMX it was first created to be synchronized from MIDI and it’s original price of around 300$ was adapted to the music business. When we introduced ArKaos VJ DMX used the advantage of having a large installed user base and so we priced it at around 700$. At first the lighting market was very careful and indeed that price originally was more a problem than an advantage. But now after having sold many DMX licenses we know that we were right.

After 5 years of distributing ArKaos VJ DMX we now see that we enabled something for the lighting industry. If you are a light designer that need to remote control some video content and if you don’t need complex programming like changing simultaneously 10 parameters of a video loops you will feel just right with the Simple Mode interface that was created first by ArKaos. You don’t need an expansive server, bellow 1000 $ you can get a decent software that will replace it. We also wanted to make sure that a laptop can run our software and use the architecture at the full extend, this allowed us to fight against the idea that you need a big physical hardware player to display some video content. This is an important decision when you develop software because it’s always tempting to reduce your target to just one configuration, while most of our competitors decided to do that we always refused to go for this facility, this in the end defines our culture of designing video software.

After 10 years of developing ArKaos VJ (it started in 1996) we had to decide to make a big step forward and redesign the whole application. In 1996 there was no GPU, no multiple cores CPU, no open source toolkits to develop cross platform software faster and easier. And so we started from scratch the development of MediaMaster for Mac and Windows but with full multi core support and with a very flexible GPU interface that will run on laptops and fly on high end graphical cards. The first version 1.x was purely dedicated to fixture control for modern DMX controllers but we knew that in order to replace ArKaos VJ DMX we also needed a simple mode interface that is introduced now in MediaMaster 2.0.

We will now continue expanding MediaMaster by making sure it works the best way under Direct X 11 on Windows Seven and use the latest Quartz Composer effects of Mac OS X Snow Leopard. While doing that we want users that bought ArKaos VJ DMX to keep on track with the latest development we are doing, this is why we offer a way for them to get a MediaMaster Express license at a reduced price. Switching to MediaMaster offers support of multi cores CPU allowing to play more loops in the same time, a flexible library interface to manage your content, frame blending that will allow you to slow down your videos while avoiding a jerky appearance, a whole new range of modern effects and finally a redesigned interface allowing to preview all running layers in the same time.